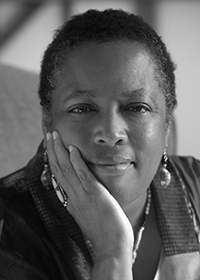 Linda Janet Holmes is a writer, independent scholar, curator and long-time women's health activist. Her writing including articles in medical journals and essays in feminist journals has been pivotal in contributing to a resurgence of international recognition of the significance of African American midwifery practices. Her book, Listen To Me Good: The Life Story of an Alabama Midwife, published by Ohio State University Press, 1996, was co-authored with Margaret Charles Smith, a traditional African American midwife.

Holmes, former director of New Jersey’s Office of Minority and Multicultural Health, now lives in Hampton, Virginia. Her most recent work focused on collecting oral histories from Hampton Institute Civil Rights Veterans who were in the forefront of the 1960's Movement to desegregate public spaces in Virginia. The oral history interviews are posted on the Hampton History Museum Website.

Holmes is currently working on her second book on midwives. This book will include the voices of diverse midwives of African descent across the diaspora, past and present.

A Joyous Revolt: Toni Cade Bambara, Writer and Activist
The first-ever, full-length biography of a trailblazing artist who championed black women in her fiction as well as in her life
Listen To Me Good: The Life Story of an Alabama Midwife
Life story of Margaret Charles Smith, African American midwife, who delivered countless babies in Alabama.
Savoring the Salt: The Legacy of Toni Cade Bambara
"Brilliance, courage and joy are what I knew of Toni Cade Bambara. Savoring the Salt mirrors her exhilarating intellect and the reach of her incomparable talents. Clearly, in these pages, the impact of her life and work—on family, friends, artists, students, colleagues—is as profound as it is forever."
—Toni Morrison